Hi everyone! On Monday we launched a new project on Kickstarter — Puestes pa’l futuro is an anthology of English and Spanish short stories, written by Puerto Rican authors from the island as well as the diaspora, which tell stories of a future, post-colonial Puerto Rico. Each story will be illustrated by a different Puerto Rican visual artist, and each illustration will be printed as a silkscreen poster, as part of a limited-edition graphic album. Go back it if you can — there’s some really great rewards (and if you’ve been on the fence about subscribing to Fireside Quarterly, our print magazine, there’s some really, really good deals on a years’ subscription as part of some of the reward tiers).

This project has been incubating since last summer, and I wanted to write a bit about how it came to be. First, some background. I have occasionally written (and more than occasionally tweeted) about the increasingly dire situation in Puerto Rico, my home, since hurricane Maria hit in 2017. You may have also heard about the protests last summer, which culminated in the resignation of the governor, or the protests this past January in response to the corrupt and inept local government response to the recent earthquakes on the island.

Or maybe you’ve heard about the unelected fiscal control board appointed by Barack Obama to ensure that the island pays off its (immoral and illegitimate, imho) debt to Wall Street vulture funds, which has imposed austerity measures that are slowly choking the island’s residents and forcing them to leave (hello 👋🏽), and that the local government cannot override (even if they wanted to — see ‘corrupt and inept,’ above).

Or maybe you’ve read about the wave of privatizations and the tax incentives for wealthy American investors who have turned parts of my island into a gentrified tax haven for rich gringos, in what amounts to a textbook case of disaster capitalism.

Or maybe you’ve heard that Donald Trump has appointed a military overseer to make sure that the local government doesn’t misuse federal funds — which amounts to the return of unelected colonial administrators to the island, for the first time since the 1950s.

The point is, the biggest disaster isn’t the hurricanes or the earthquakes, it’s the underlying colonial condition which makes everything worse, from corruption and ineptitude at the local government level, to indifference, contempt, and racism-fueled exploitation at the federal level. You may just recently be hearing about it in the mainstream media, but Puerto Rico has been in the throes of one colonial crisis or another for over 100 years — ever since the US invaded the island in 1898.

One of the principal ways in which this manifests itself is in the stories we tell ourselves as a society — or don’t, because erasure is a huge component of colonialism. For instance, I was not taught Puerto Rican history in school, I’ve had to learn it on my own. Same goes for Puerto Rican literature, particularly contemporary works.

So as I was watching the protests in San Juan unfold last summer, I couldn’t help but notice that the people using their considerable platforms to call people out into the streets were musicians: Bad Bunny, Residente, Ile, and Ricky Martin in particular all were instrumental in getting people out into the streets. This was no surprise: the creative class in Puerto Rico has always been politically engaged, and many have always been at the forefront of decolonization or pro-independence movements.

It occurred to me that, if it’s up to musicians to use their enormous influence to get people out into the streets in the moment, then it’s up to writers and visual artists to build on that momentum and, after the protests are done, help to envision real, lasting change. And, since I run a publishing company, it further occurred to me that I could help make something like that happen: 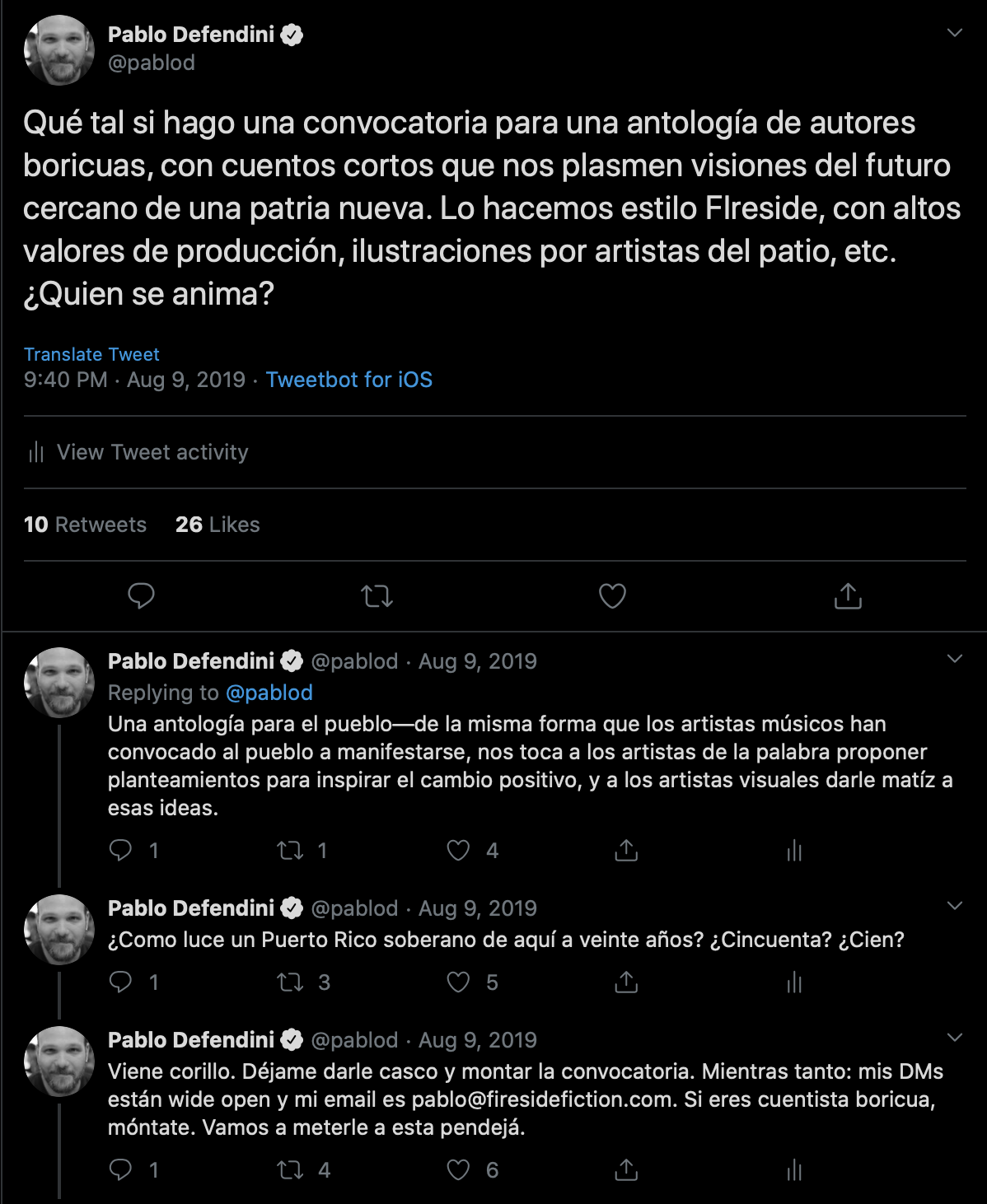 Writers need to tell the stories of the world we want to build. And speculative fiction is particularly well suited for this task, especially when part of what has to be done is to break with centuries of colonial conditioning that tells Puerto Ricans that we have no history, that we can’t do things on our own, that we’re too small, or that we’re children who need minding. Speculative fiction can create a space where we can imagine things that readers would otherwise discard as impossible.

Around the same time that summer, I came across a novel by a Puerto Rican author, Juan López Bauzá. The premise of El resplandor de Luzbella was very compelling to me, so I ordered it and I took delivery of my paperback just as I was about to hop on a plane to Dublin, for the Hugo awards ceremony, where Fireside was nominated for an award. Through some delayed flights and some good fortune, I ended up having getting to spend a day wandering around one of my favorite cities, Amsterdam, with nothing but López Bauzá’s book to keep me company. I spent the day walking, drinking coffee, and reading. By the time I had to get back on my plane to Dublin, I was hooked. This book and its ultimate premise (which I won’t spoil here) were exactly what I had been thinking about with the idea for an anthology. 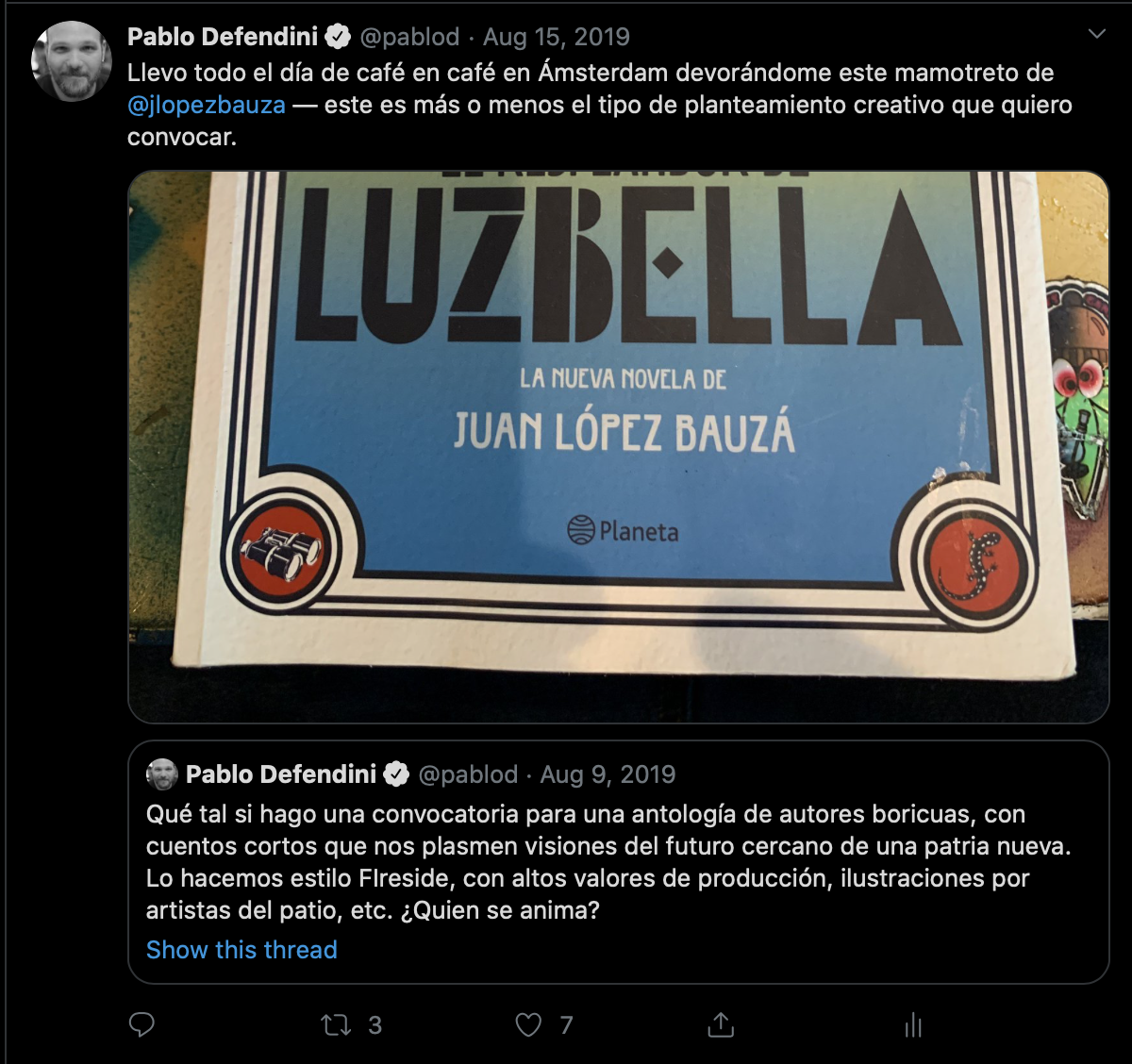 And so, Puestes pa’l futuro (‘Ready for the future’) was born.

The anthology will be published as a series of editions, which will run the gamut from cheap, accessible zines that can be handed out freely at community meetings throughout the island this summer, to a handy trade paperback edition, and finally a finely bound, limited edition hardcover for collectors. Naturally, the anthology will also be available as an ebook and each story will be recorded as an audio version.

The initial list of contributors is a who’s who of Puerto Rican creative workers, including authors Tere Dávila, Rita Isabel Collazo Vázquez, José Borges, Elidio La Torre Lagares, Pedro Cabiya, Mikephillipe Oliveras, Rojo Robles, and Xavier Valcárcel; as well as visual artists Molly Crabapple, Garvin Sierra (Taller Gráfico PR), [Rosa Colón Guerra (Sodapop Comics), Sergio Vazquez, Sarah Urbain, Rafael Enrique Vegas, Goñi Montes, and David Zayas. The project will be edited by my dear friend Mila Aponte-González. The limited edition silkscreen graphic album will be printed by Taller Gráfico PR in San Juan, PR. The chapbook editions of the stories in the anthology will be printed by Radix Media in Brooklyn, NYC, and the audio edition of the anthology will be narrated by Victor Ramos. Everyone is super excited about the project and raring to get started once we’ve funded the Kickstarter campaign.

We’re also be holding an open call during the Kickstarter campaign for additional Puerto Rican authors and artists, in order to make sure that we give unknown and/or marginalized creators a chance to contribute to the project as well.

After the Kickstarter campaign is finished, the anthology will be available for sale, and a percentage of all sales will be donated to the Centro de Periodismo Investigativo de Puerto Rico, which does investigative journalism work that is crucial for holding those in power accountable for their abuses on the island. In addition to other lower-profile but just as important stories, they’ve been tracking the use and misuse of disaster funds since hurricane Maria, and they broke the ‘Rickyleaks’ story which sparked the protests which eventually led then-governor Ricky Rosselló to resign.

So go check out the Kickstarter, and back us if you can. Even if you can’t, help us spread the word. For obvious reasons, this project is near and dear to my heart, and the goal is very ambitious, so we’ll be pushing it hard over the coming weeks. Tell your friends, tweet about it, and back it — we’re counting on your help to make Puestes pa’l futuro happen.

Pablo Defendini is a designer and developer for hire, with a focus on editorial design for digital media. He helped launch Tor.com, before moving on to work for companies that sit in the overlap between publishing and technology, like Open Road Media and O’Reilly. Pablo was born and raised in San Juan, Puerto Rico, lives in New York City, and works with people all over the world.