The novel collection of Lilith Saintcrow’s Fireside serial She Wolf and Cub is out today!

I saw Logan yesterday, and hot damn, that movie shares a lot of DNA with this book. If you liked Logan, I think you’ll like She Wolf and Cub. 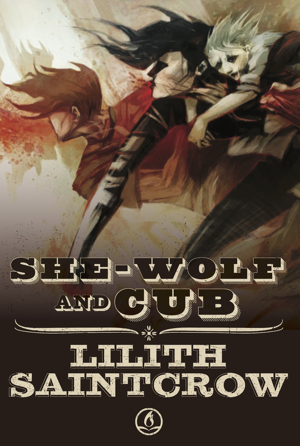 Ever since they gave her a new cyborg body and a steady stream of murderous work, she’s known the rules. Keep your head down, do your job, don’t get involved.

Then they sent her to assassinate a child.

Instead, she took him out of the City and into the Waste. Of course they’ll be coming for her, and for the strange, quiet, thirsty boy she’s rescued. Because he’s not just a child — he’s a profitable experiment. Bounty hunters. Fellow cyborgs. Cannibals. Monsters. They’re all after him. All she has on her side is an almost-invulnerable body, a lifetime’s worth of stubbornness, and the willingness to kill whoever she has to.

It’s going to have to be enough.

Brian White started Fireside in 2012 with a Kickstarter and a whole lot of love. Over the next five years as editor and publisher – with the help of his amazing team and of Lauren, his wife and partner in crime – he expanded Fireside from a one-off magazine to a monthly publication to its current form, a site with weekly fiction and occasional nonfiction. Fireside published 150 stories under his tenure, as well as five novels and one novella. He is deeply proud to have had a part in bringing those stories into the world. He was gratified to have proved that writers can be paid more for their work than the industry accepted, and perhaps most proud of the #BlackSpecFic report that Fireside published in 2016. He stepped down as editor and publisher in the summer of 2017, but he remains an equity partner in the company.